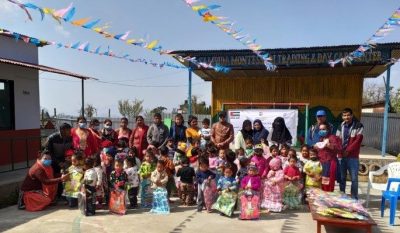 Kathmandu: Nepal Muslim Women Welfare Society distributes clothes among the needy in different places of valley with the  support of Embassy of United Arab Emirates, in Nepal . The embassy works inclusively and has supported different relief and distribution programs in different regions o Nepal. The cloth distribution program was conducted in different places and included women and children from Muslim as well as other ethnic communities. The distribution was done in central office of Nepal Muslim Women Welfare Society for 15 days which included individual as well as bulk distribution. On the first day of distribution, the chief ward officer of Ward no. 28, Mr. Bhai Ram Khadgi was invited as special guest. He appreciated the program and gave best wishes for such program that benefits needy women and children.

Similarly, the cloths were also distributed to women and children in slum area of Teku and in a girls’ Madarsa called Fatema Lil Banaat located in Taudaha.

The cloth progarm was also conducted in a community-established school called Samida Montessori in Godamchaur, Ward no 1. Lalitpur.  The chairperson of Ward Committee, Mr. Harsha Karki was also invited as a chief guest and the distribution was conducted through him.